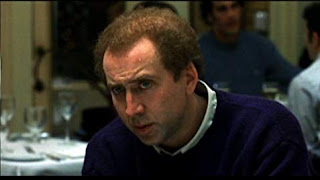 My boyfriend and I are in disagreement about the merits of Nicolas Cage's acting career. I hope we know each other well enough at this point for you to guess which side I'm on. This movie, along with Raising Arizona are often invoked in his defense.  For my part, I cite the remainder of his filmography. I'll admit this is a good movie, but it's a good movie in spite of Cage, not because of Cage.
Sometimes the only thing to do to cure writer's block is to write about having writer's block. Charlie Kaufman is struggling to adapt Susan Orlean's The Orchid Thief to a screenplay. His twin brother Donald has moved into his house and mooches off of Charlie. Oh, like Cage is the first person to play a pair of identical twins. Ahem, anyway, Charlie goes to New York City to discuss the screenplay with Orlean. Charlie's social awkwardness once again hampers him from having a successful career. Twin antics ensue.
Obviously, the presence of Meryl Streep elevates a movie, even if it can't save it entirely. I found this relatable, as I constantly deal with writer's block. It was never predictable, and I really enjoyed trying to guess what would happen next.
It's a little smug, but so are writers.
RATING: ****-
Interesting Facts:

Nicolas Cage said he ignored all his acting instincts in this role and just played the part exactly how Spike Jonze wanted it. That explains a few things.
All three main stars of Con Air appear in this movie. The reunion we were all waiting for.