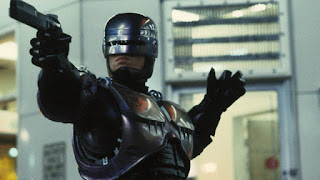 Like Mary Poppins, this movie is undeniably iconic and naturally deserves a place on the List. While action isn't my go to genre, it can fit a certain mood, and I certainly appreciate the silliness right now. Although I guess a movie about cops murdering people doesn't provide much escapism in 2020.

Officer Alex Murphy is murdered by a gang leader. He is brought back to be the cyborg RoboCop, built to be the ultimate police officer...whatever that entails. Predictably, it doesn't go as planned.

So this movie pretty much fulfills all its promises: exciting actions scenes, cutting edge special effects (1987 special effects, but still), and recognizable catchphrases. And if you have to force a metaphor out of it, there's that too.

Again, it might hit a little too close to home right now, but if you can get past that, it's a fun movie to watch with somebody and mock mercilessly.

The RoboCop suit was so hot and heavy that Peter Weller was losing three pounds a day from water loss, until an air conditioner was installed in the costume.