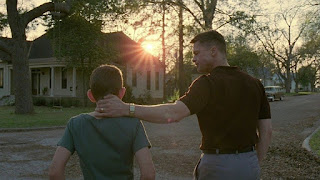 Are there any negative medical effects to rolling your eyes? Maybe it trains your body to be disdainful. I don't want to be disdainful. I really tried with this one, but I ended up hating this movie as much as it dared me to.
Ugh where to begin? This movie asks itself the same question. A middle aged man remembers growing up in 1950s Texas. His mother was angelic and devout, and his father was strict and distant. The origins of the universe are explored, and a dinosaur is nice to another dinosaur.
I've never seen the movie Cloud Atlas, and god willing never will, but I've read the novel. This reminded me of that narrative. It's trying to tell a story so big that it ends up shooting itself in the foot. There is a reason storytellers zoom in, it's the only way to make sense of things. It's also a very spiritual movie, and right now I am not a spiritual person.
It's a movie that stubbornly refuses to answer any questions, and I got bored of being stonewalled for three hours.
RATING: **---

Interesting Facts:
Over a million feet of film were shot and printed.
A few American theaters would put up signs warning viewers about the film's untraditional structure, after there were walk outs and demands for refunds.
Posted by Amanda at 4:23 PM