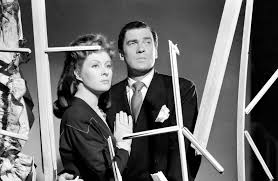 I think I have seen all the Best Picture winners to date, with the exception of Green Book. I really don't like a lot of the movies on that List, though, Mrs. Miniver included.

Mrs. Miniver tells the story of a British housewife whose life is touched by World War II. Her son, Vin, falls in love with Carol and enlists in the Royal Air Force. This can only end in tears.

Can propaganda ever be art? It's not an easy question to answer. There is a manipulative element inherent in propaganda that doesn't allow for much personal interpretation. Also, all of these characters had such a stiff upper lip that I had trouble relating to them. It just felt like everybody was supposed to be the ideal English person. Like if we had a movie now about a family who all wear masks and limited their social gatherings to five people. Actually, I'd probably watch that too.

A true classic, but not one I want to revisit again and again.

Winston Churchill said that this film had done more for the war effort than a flotilla of destroyers.

First movie to be nominated for five acting Oscars.