Get Out
2017
Directed by Jordan Peele 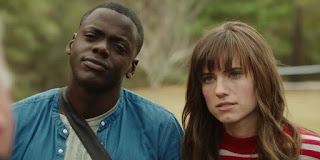 I finally did an official inventory of the movies I still have left on this List. I was afraid if I didn't, I would end up with 1230 movies and have no idea what's missing. Which is exactly what happened, but luckily, I figured it out pretty quickly. I can't believe I missed an opportunity to write about this movie for October, and instead tried to convince everyone Elephant was a Halloween movie (did it work?). Oh well, I can now give this movie the respect it deserves.

Chris Washington is nervous to meet the family of his white girlfriend, Rose Armitage. The Armitages have a home in upstate New York. Her father is a neurosurgeon, her mother is a hypnotherapist, and her brother is a douchebag. Chris witnesses some strange behavior from the Armitages' black housekeeping staff. I guess I will end my summary there to avoid spoilers.

This movie does such a great job of showcasing microaggressions, and usually films about race aren't capable of that subtlety. I love Jordan Peele movies (Us was also fantastic) and I hope he keeps making them. I think people (and certainly the Academy) underestimate the level of social commentary that horror movies can provide.

I saw this in theaters in the before times (RIP). There is a moment when a police officer shows up. In any other horror movie, the sight of a police car would be a huge relief. However, when the cop pulled up in this film, everybody in the audience groaned. I think this shows how effective Peele was at shattering the illusion of a post-racial America.

There's a serious lack of representation of Black people in horror movies, so much so that it's become a familiar trope that the people of color will die immediately. Thank heavens for Jordan Peele (and his wife).

Jordan Peele said, "The Sunken Place means we're marginalized. No matter how hard we scream, the system silences us."

Much of the dialogue was improvised.