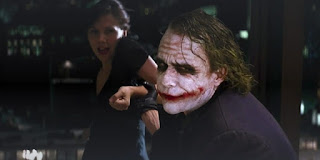 I was surprised to discover I hadn't written about this movie yet, as it's the major exception to my "I don't like superhero movies" rule. I actually think it's nearly impossible not to enjoy this movie, but perhaps one of my followers will prove me wrong!
So this is the second installment of Nolan's Batman trilogy, but it's not necessary to see Batman Begins to understand the plot. It's almost better not to see Batman Begins first, because then you can forget Rachel Dawes is being played by a different actress. Basically, Batman, Lieutenant James Gordon, and District Attorney Harvey Dent work somewhat in unison to dismantle crime in Gotham City. This is a task made much more difficult by the arrival of the Joker, an anarchist who is the human embodiment of chaos.
The most memorable part of this movie is Heath Ledger's performance. I think it works so well because shockingly, it doesn't overpower the entire film. There's so much else going on, that the entire film doesn't have to revolve around his Acting (like Joaquin Phoenix's Joker). There's an amazing supporting cast, which includes Morgan Freeman, Michael Caine, Aaron Eckart, Gary Oldman, and yes, even Christian Bale. My other usual issue with superhero movies is that there are no stakes (e.g. if a character dies they are brought back in the next movie, if a headquarters is destroyed, it's fully repaired in the sequel, etc). That is certainly not the case here.
And it's just so damn quotable too. "You either die a hero, or live long enough to see yourself become the villain" is true in reality television, and true in reality as well. And Michael Caine's "some men just want to watch the world speech" is unforgettable.
So in my always humble opinion, the best superhero movie of all time.
RATING: *****
Interesting Facts:
Ledger based his performance partly on Sid Vicious and partly on Alex DeLarge.
Body count of 36.
The action of the movie takes place over only nine days and nights.
Posted by Amanda at 4:46 PM