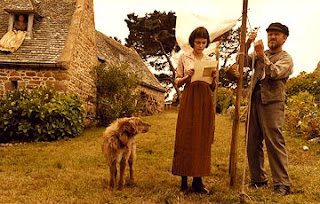 You can always count on Jean-Pierre Jeunet to imbue a film with a whimsy, even if he is dealing with a subject matter as bleak as World War I. I am actually just hitting that era with my 1001 Book blog (check it out), so it's interesting to see another story take place with this setting.
The always delightful Audrey Tautou stars in this film as Mathilde Donnay, a woman who refuses to give up hope that her fiancee is alive after receiving a report of his death. Mathilde begins to piece together what happened on the battlefield. At the same time, another woman, a prostitute named Tina Lombardi, is on her own quest for vengeance on all the military officers who had a part in her lover's death.
This was a very stylish movie that isn't shy about portraying the grisly violence of war. And Tautou has to be one of the most likable actresses of all time. I think if certain actresses tried to pull off that level of earnestness and optimism, it might be grating. But I was cheering for her the entire time.
The length also suited the mood of the film and there were some interesting twists throughout. Don't piss off Marion Cotillard.
RATING: ***--
Interesting Facts:

The movie was refused financial aid by the French government because it was produced by a company owned by Warner Bros.
Marion Cotillard had eight minutes of screen time.
Posted by Amanda at 8:02 AM