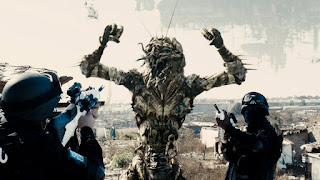 This was another movie that I had previously seen in a film class. I guess the professor was excited about the parallels between this movie and Apartheid. And they are pretty exciting.

The movie is partially presented in found footage format. In this universe, an alien spaceship carrying a population of sick insect-like aliens appeared over South Africa in 1982. These aliens were eventually put in an internment camp (District 9). Twenty years later, one of the aliens, Christopher Johnson, attempts to return home with his son. He crosses paths with a somewhat bumbling bureaucrat, Wikus van der Merwe, who becomes, shall we say, personally involved in the fates of Christopher and his family.

I really like the style of this movie, and I thought it was a fresh take a rather stale concept (i.e. found footage). Like I said, it was interesting to see all the subtle nods to actual policies that existed. I loved the character of Wikus, who felt very real to me, and witnessing his transformation.

A thoughtful sci fi movie without any Hollywood sheen. Worth watching even without the encouragement of a hot film professor.

The language the aliens use was created by rubbing together pumpkins.