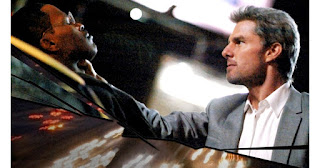 I keep thinking my Tom Cruise days are behind me, but then he pops up in another entry. It's scary to know he could be lurking behind every corner. But I'll be honest, I was craving something a little less broody than what the List has been doling out lately. This fit the bill pretty well. At the very least, it didn't contain any wartime atrocities.
Max is a Los Angeles cab driver who agrees to drive a stranger to several locations over the course of a night for $600. As Max waits at the first stop, a body falls on his cab. The stranger reveals himself to be a hitman with a tight schedule. He forces Max to drive him to his remaining jobs, and Max becomes increasingly desperate for a means of escape.
I really love Jamie Foxx, who pretty much steals the show from Cruise with his convincing performance as an ordinary man who finds himself hopelessly out of his league. There was also a really powerful supporting cast, which included the always impressive Mark Ruffalo and Javier Bardem.
I think the script coupled with the performances prevented this film from being another thoughtless action movie, even if it kind of turned into the Terminator toward the end. I enjoyed it, and it was a nice reprieve from really dark subject matters.
RATING: ****-
Interesting Facts:
Spike Lee, Martin Scorsese, and Steven Spielberg all passed on the opportunity to direct.
Adam Sandler was considered for the role of Max.

John Travolta was considered for the part of Vincent. One creepy Scientologist at a time please.
Posted by Amanda at 8:54 AM