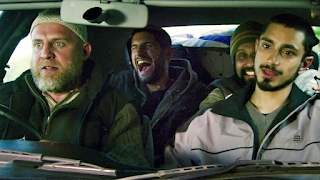 Creating a comedy about terrorists is a daunting task. And I tend to hate the comedies that aim to be as offensive as possible, like Borat. But I actually quite enjoyed this. It didn't feel like any character was the butt of the joke. Instead, the comedy was a means of demystifying the idea of suicide bombers.
A group of radicalized British Muslim men aspire to commit an act of terrorism. There's Barry, a white Islam convert who believes the best way to avenge Western imperialism is to bomb a mosque. There's Omar and his witless cousin Waj. Then there's Faisal, who is perhaps the stupidest of the bunch.
I like that the movie didn't dwell on the religious fanaticism behind the actions of the group. I think we tend to believe terrorists are purely motivated by religion, and often ignore the other factors that go into it.  Here, less focus is paid on religion, and instead the film zeroes in on their dim-witted antics. Strangely, it still felt has though their characters were treated with respect.
But shame on them for considering blowing up a Boots. They have such good candy there.
RATING: ****-

Interesting Facts:
After the film premiered the UK terror threat level was raised to "severe."
Posted by Amanda at 5:49 AM