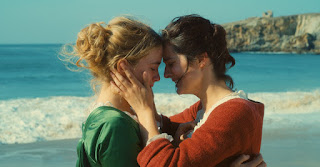 I keep going back and forth on whether I liked this movie or not. I didn't really enjoy the experience of watching it, but it had some redeeming qualities that I admire. So maybe I will just settle for telling other people to watch it, and never seeing it again myself.

At the end of the eighteenth century, Marianne is commissioned by a wealthy woman to paint a portrait of her daughter Heloise. Heloise is to be married off to a Milanese nobleman. Because Heloise refuses to pose for portraits, Marianne pretends to be her hired companion so she can study her and paint her in secret. The two begin falling in love, but LGBTQ period dramas rarely have happy endings.

The cinematography was beautiful, and I feel an attempt was made to make each frame look like a painting. But I think this also gave the film a stilted quality sometimes. I was actually surprised that the two leads had been a couple prior to filming, as they didn't seem to have that much chemistry. Maybe that's why they aren't together anymore.

I also liked how the movie challenged the idea that the Muse is a passive participant who doesn't have much control over the actual act of creation. It felt as though Heloise and Marianne were painting together, even though Heloise never picked up a brush. And the ending was moving.

The decision to not have a score also makes sense, given the theme of translating a painting into a movie. But it did make the film feel very slow. So I am still not convinced I liked it, but it says something that I can't stop thinking about it.

In the festival scene, the women are chanting in Latin "they cannot escape."

The final shot in the movie is two minutes and 27 seconds long.