The Big Lebowski
1998
Directed by Joel and Ethan Coen 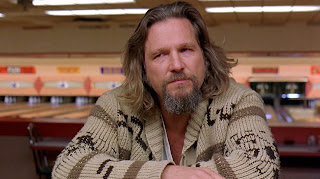 My sister and I decided to watch this movie with White Russians, because we love a good theme night. We ended up hating the drink, and pretty much hating this movie as well. It was surprising, because I usually like Coen Brothers movies, and I usually like mixed drinks. Maybe I have the pandemic crankies.
Jeffrey "The Dude" Lebowski is a stoner and bowler in Los Angeles. Two goons for hire mistake him with a millionaire also named Jeffrey Lebowski and assault him in his house. On the advice of his friends, The Dude decides to seek compensation with the other Lebowski, and things just get more complicated from there.
When compared to other Coen Brothers movies, I think this is one really falls short. The performances are still excellent, but I think it was trying a little too hard to be quirky. I could have done without the dream sequence.
Just doesn't feel as organic as their other movies, and I can see why it was left out of future editions.
RATING: ***--

Interesting Facts:
The Dude says "man" 147 times in the movie.
John Goodman's favorite movie in which he appeared.
Posted by Amanda at 5:38 AM