849. Aileen Wuornos: The Selling of a Serial Killer

Aileen Wuornos: The Selling of a Serial Killer
1992
Directed by Nick Broomfield 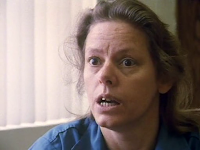 I have never actually seen Monster, although I have heard Charlize Theron's performance praised many times.  Apparently, she doesn't wear make up and gained a lot of weight.  Like that's hard.  Ba-dum-tshh.

This film is a documentary on Aileen Wuornos, a female serial killer (although she claims all of the men she killed were trying to rape her).  Broomfield actually interviews Aileen, as this is before she was executed (but after she was sentenced).  That's obviously the creepiest part of the film, but Broomfield also gets chilling footage of her exploitative lawyer and adopted mother.

I don't know what to make of Aileen.  It seems like she often tries to tell people what she thinks they want to hear, but, not being that intelligent, rarely pulls it off.  I did feel sorry for her, and given the way prostitutes are treated, I don't doubt that she was attacked.  I also think the death penalty is an archaic and brutal practice, but I won't get into that too much.  I think I had enough time on my soapbox during my review on The Rapture.

One of the best documentaries I have seen.  Highly recommended.

Charlize Theron would watch this film in between takes of Monster to perfect her character.
Posted by Amanda at 8:02 AM