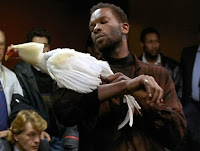 Really?  A movie about cock fighting?  I think a lot of my readers think I am squeamish when it comes to unpleasant topics in film.  That is certainly the case here, as I am really against animal cruelty (and don't call me a hypocrite because I am a vegetarian).  Of course, the Book really doesn't care and continues to feature movies where animals' throats are slit on camera.  At least here no animals were actually harmed.

Dah and Jocelyn decide to pair up and organize illegal cockfights.  Jocelyn is more attached to the roosters than Dah, with his favorite bird being No Fear, No Die.  The duo take on another partner, Pierre, who owns a space with a nausea-inducing light show.  Pierre urges Jocelyn and Dah to make the fights more violent by adding razor blades and spurs to the mix.  Jocelyn begins to lose it, with his growing attachment to Pierre's wife not helping matters.

Chances are that unless you are following the List, you haven't heard of this movie, as it only has two IMDb reviews (one of which is written by someone who worked on the film).  I think it is a hard movie to make heads or tails of (HA! Animal humor), but I may be over thinking it.  I felt like the director wasn't very concerned with making a statement about animal cruelty.  She seemed more intent on making a comment on race, although what that comment was, I am not sure.

An interesting one to contemplate, but I definitely could have avoided it.

First of eight collaborations between in Claire Denis and Alex Descas.
Posted by Amanda at 8:49 AM