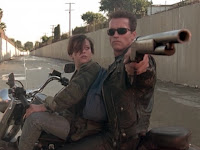 Ah, the age old debate.  Which Terminator film was better?  I like to pretend that there were only two Terminator movies.  I would like to think I didn't see a trailer for the remake, in which James Cameron pleads desperately with the audience to go see Terminator: Genisys (spelled incorrectly for some artistic reason I'm sure) in a super pathetic way.

Skynet has sent yet another cyborg into the past, T-1000, this time to kill John Connor.  Luckily, future John sent back a cyborg as well to protect his past self because obviously he knew it would work, since it already happened.  But wouldn't Skynet know it didn't work if John still existed in the future?  Oh right, I forgot my rule.  Don't think too hard about time travel movies.  Anyway, John fears that T-1000 will also try to kill his mother.  He and his trusty cyborg decide to rescue her from a mental hospital, which she was sent to for warning people about the upcoming apocalypse and bombing computer factories.

How bad ass was Linda Hamilton in this?  Her performance alone was worth the price of admission; it was fascinating watching her transform from an ordinary girl in the first film to a unstoppable warrior in this.  T-1000 was also a fantastic villain.  I actually didn't find the special effects to be too overpowering.  Even with the CGI, you still had some very human scenes to balance out all the explosions and fight scenes.

There are many valid criticisms of this movie (yes, we all want to punch young John in the face), but I still had a blast with this one.

Linda Hamilton's twin sister was used in the shots when there are two Sarah Connors.

The special effects shots total sixteen minutes of the film.