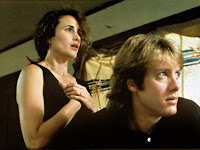 John is married to Ann, but is sleeping with her sister Cynthia.  He doesn't feel too guilty about it because Ann has never had an orgasm and at least Cynthia has the decency to fake it.  John has invited an old college friend, Graham, to live with them until he finds a place of his own.  Graham can't sustain an erection around women so he interviews women on their sexual fantasies and...enjoys the tapes later.  Apparently, no one told him about pornography.

Parts of the film are kind of silly.  John is a ridiculously douche-y character.  I get that the filmmakers wanted us to hate him enough so we would cheer for the Graham/Ann (Gran, if you will) romance, but at a certain point, they went overboard.  He didn't feel like a character, he felt like a plot device.  Also, I have a feeling Graham and Ann's sexual disorders were a bit simplified; I find it hard to believe either one of their problems would just magically go away because they are in love.

Still, the dialogue in this movie is great and feels real.  It is easy to look past the flaws and into Spader's seductive eyes.  Maybe that was just easy for me.

Jennifer Jason Leigh turned down the role of Cynthia, later regretting the move.
Posted by Amanda at 8:54 AM