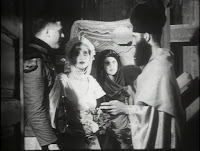 Man, people have really been nostalgic for early Soviet cinema lately.  First Asthenic Syndrome and now this.  If we were going to resurrect a dead genre, can it not be silent Soviet war films?  How about screwball comedies?  Or film noir?

By about five minutes in, I was asking myself "what the fuck am I watching?"  I apologize if this plot summary is a bit rough.  A one-legged Canadian soldier, Lt. Boles, arrives in Archangel to assist in the Bolshevik Revolution.  His lover Iris has died, but because he has amnesia, he believes she is still alive.  Meanwhile, Veronkha is married to Philbin, who also has amnesia and can never remember that Veronkha is his wife.  When Lt. Boles sees Veronkha, he believes she is lost lover Iris.  Then Veronkha gets amnesia...okay, I am going to stop.  This is getting stupid.

I think everyone on this film did their best to behave as weirdly as possible.  I suppose part of the nostalgic feel was to make everyone talk in a bizarre way, making it seem like it was dubbed in English.  I mean, that was intentional, right?  Who knows.  The film is filled with strange imagery, including a scene where a man strangles an attacked with his own intestines.  Gross.

This film wears its strangeness with pride and I can definitely see why some people would take to its weirdness.  I, on the other hand, found it to be incredibly grating.

First film of Bif Naked.  I don't know who that is but I had to include it because of his name.
Posted by Amanda at 10:15 AM