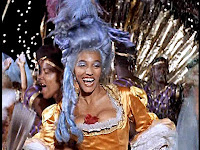 Well, that was interesting.  Most people know the myth of Orpheus.  This time, though, the story is set in Brazil during carnival time, Orpheus is a jackass, and Eurydice is a home wrecker.

This movie has gotten a lot of criticism because of the way that Brazil is portrayed as a giant dance party.  The costumes, the colors, and the dancing are all quite beautiful, but of course, the release of this film didn't exactly do wonders for breaking stereotypes.

Anyway, like I said, Orpheus is a horrible character in this film, which ruined the entire movie for him. He is engaged to Mira but treats her like crap and won't even buy her an engagement ring because he wants the money for his guitar (she ends up loaning him the money).  He constantly humiliates her in public as well, flirting with other girls and pushing her away.  And, of course, Eurydice is portrayed as this sweet, innocent girl who just happens to be sleeping with a married man.

Add that to the fact that the acting is average at best (Camus used non professionals) and you have a forgettable movie with annoying characters.  Skip it.

Panned in Brazil but won the Academy Award for Best Foreign Language Film.
Posted by Amanda at 12:33 PM