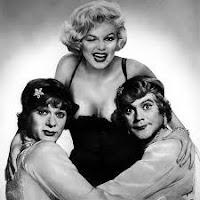 I was stunned when I realized I loved this movie.  I have never thought men dressing in drag was funny.  I feel like most comedic plays I have gone to have to include at least one gag where a man is dressed up like a woman.  What is that about?

However, Billy Wilder didn't just rely on the "oh my god, a man is in a dress, how outrageous is that" gag for laughs.  This movie is full of risqué jokes and witty dialogue that makes the film absolutely hilarious.

Joe (Tony Curtis) and Jerry (Jack Lemmon) witness the Saint Valentine's Day Massacre and are forced to go into hiding.  Posing as Josephine and Daphne, they join an all girl band on its way to Miami.  Of course, they both immediately fall for Sugar Kane, played extraordinarily well by Marilyn Monroe.

I absolutely adore this movie.  The acting is fantastic; each character has excellent comedic timing, even the gangsters who have very few lines.

There is really nothing to dislike about the film.  It is extremely quotable and my sister and I often reference it in conversations.  A great movie that is as funny today as it was in 1959.

Wilder blasted Monroe after this movie was shot and did not invite her to the wrap party.