Popiol i diament
Ashes and Diamonds
1958
Directed by Andrzej Wajda 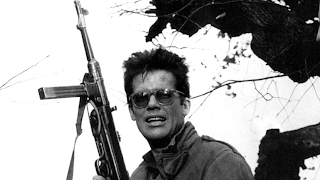 I delayed writing about this movie even though I finished it last night because I was unsure what my opinion was.  Now, it is the next morning and I am convinced that I did enjoy it but there are still some pretty big flaws that stopped it from being a favorite.

This is the story of Maciek, a Resistance fighter whose father is a communist.  Maciek is ordered to kill a Communist leader but soon realizes that his target was a fellow soldier.  Oh yeah and there is kind of a half assed love story because I guess the filmmakers realized that the movie was a total sausage fest.

The star of this film, Zbigniew Cybulski, was supposedly, before he died in a horrific railroad accident, hailed as the Polish James Dean.  I actually think that he was a much better actor than Dean and his look is arguably even more iconic.  When the film started, he looked so familiar that I thought I had already seen the film.  I realized I only felt that way because his style has been imitated to death since then.

Another great thing about this movie was the cinematography.  The blood in the sheets scene was absolutely beautiful.  However, this film has been praised for the death scene but I feel like I had seen a lot of similar murders before this movie; off the top of my head, Man of the West had a death just like this one.

Like I said, the love story is kind of unnecessary and rushed.  This film definitely should have been longer in order to spend more time exploring different relationships, although I hesitate to say that because some parts of the movie seemed to drag.

So yeah, this film is a bit of a question mark for me but I would still recommend it, if only for Zbigniew and the wonderful cinematography.

Martin Scorsese showed this movie to Leonardo DiCaprio when they were making The Departed since both films explored similar themes.

Sunglasses sales skyrocketed after the release of this movie.