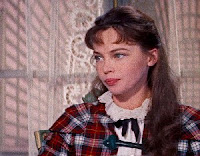 What a disappointment.  I usually love musicals but this movie was a complete miss for me.

We begin with a song that an old man sings called "Thank Heaven For Little Girls".  All right, now I know that 1958 was a different time and I am probably jaded but I just found the entire number really creepy.

Then we meet Gaston, who is bored being rich and handsome.  However, he does enjoy spending time with Madame Alvarez and her granddaughter Gigi.  Gigi is training to be a prostitute.  I don't take prostitution lightly, especially when we are talking about a girl as young as Gigi.  Anyway, Gaston falls in love with Gigi and she reluctantly agrees to be his mistress (??????).

Am I the only one is creeped out by Minnelli films?  Honestly, Meet Me in St Louis and this film scared me more than the last 20 horror movies I have seen.

I know you probably think that I should not be taking this movie as seriously as I am.  But honestly, I just found it highly disturbing and there are not even any great musical numbers.  Just…yikes.

Considered to be the last great MGM musical.