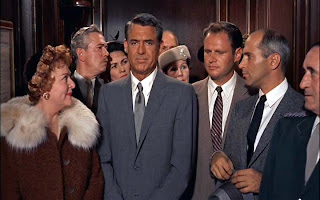 After a string of pretty serious films, we get a fun break with North by Northwest.  Has anyone not seen this movie?  At the very least, it has been parodied to death; everyone is familiar with the crop duster scene.  That is why I chose to go with unconventional picture above that just exudes awkwardness.

The last Hitchcock film we had was Vertigo, which I criticized for being too implausible.  While being mistaken for spy is not exactly an everyday occurrence, this film is a lot easier to follow and a lot more fun.

The scenes in this film are absolutely iconic; how could anyone forget the Mount Rushmore scene or the aforementioned plane scene?  Most of all, though, this movie is hilarious.  Grant has fantastic one liners and his pacing, as always, is spot.  One of my gripes with Vertigo was that Jimmy Stewart was miscast.  However, Grant was perfect for this role and I can't imagine the film without him.

This is definitely one of my favorite Hitchcock films and if you haven't seen it yet: what is your problem?

James Stewart was interested in the role of Thornhill. Hitchcock wanted Grant to play the lead so badly that he waited until James Stewart was committed to Anatomy of a Murder before he offered Stewart the part so Stewart would be forced to turn it down.

Grant is on the left side of the screen for most of the movie.

HITCHCOCK RADAR: At a bus stop during the opening credits.