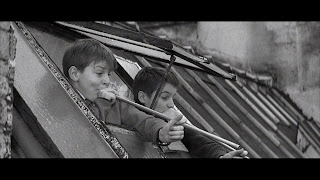 I wish that I had watched this film some time in middle school because this is one of the best representations of the plights of adolescence that I have ever seen.  Of course, this movie takes the problems to the extreme but I can remember being bullied by teachers and adults and feeling extremely helpless.  Now I can just reflect on how much it sucked being a preteen but I could have used something like this when I was still going through those problems.

Okay, rambling time is over.  Let's get to the film.  This is the story of Antoine Doinel, who is bullied by his teacher and stepfather and is misunderstood by his mother.  The film serves as a expose on the horrible treatment of juvenile delinquents in France.

I found this movie a lot easier to relate to Rebel Without A Cause.  To me, James Dean was just acting like a hot headed idiot which is not at all what Child Amanda was like.  However, in this movie, we get a realistic kid who is just really unhappy and is powerless to do anything about it.

Overall, a good movie and this is what my kids will be watching while other kids are watching Disney. They are going to be weird.

The title of the film is a reference to the French idiom which means to raise hell.

The actors dubbed all of their lines.