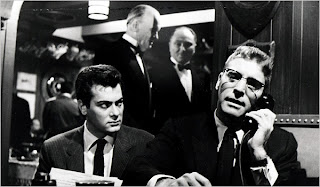 I was familiar with Mackendrick's so called comedies before this movie, but I had never seen any of his dramas.  I was nervous about this movie because I hated his previous films.  However, Mackendrick's inability to be funny actually came in handy with this movie, which was a very compelling drama.

This is one of those stories where every person is just awful.  This is usually not my kind of thing; call me a sap but I like having a hero in the story.

Anyway, JJ Hunsecker blackmails a columnist into ruining his sister's fiancé.  It is sort of like a Shakespearean tragedy in that there a lot of schemes and it the end everything goes to hell.

First of all, Burt Lancaster is freaking terrifying.  He had the kind of look in this film that I associate with serial killers.  Take a look: 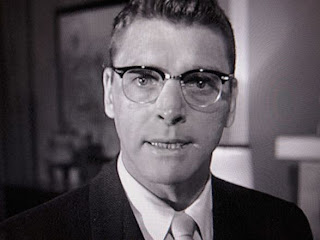 I mean, what a creep.  Anyway, the book says that Hunsecker had a incestous love for his sister, which makes the whole story even sicker.

So did I like it?  Well, it was certainly entertaining and with stars like Tony Curtis and Burt Lancaster, you really cannot go wrong.  Still, it was kind of disturbing and left a bad taste in my mouth.  This is one that I might have to think about for a couple days and then come back to.

Hunsecker was based on Walter Winchell.

"I'd hate to take a bite out of you.  You're a cookie full of arsenic." is ranked #99 in Premiere's Greatest Movie Lines of All Time.