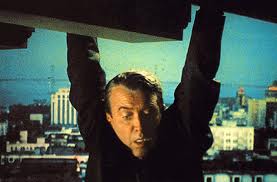 Well, this is an odd one.  On the one hand, you know that I adore Alfred Hitchcock and I think all his movies are extremely well done and compelling.  On the other hand, the plot of this movie is so ridiculous that it is almost laughable, which ultimately ruins it a little bit for me.  Weirdly enough, this is often considered his greatest work.

Jimmy Stewart plays a private eye who quit the police department after his fear of heights indirectly caused the death of another police officer.  He is hired by Gavin, an old college friend, to follow his wife and find out why she is acting so strangely.  Um and some more stuff happens.  This is a spoiler free environment.

All right, first of all, when is Hollywood going to stop with movies where there just happens to be someone that looks exactly you (always played by the same actress) and no one can tell the difference? That never happens in real life.  We don't all just have clones or doppelgängers that are able to serve as plot devices.  I swear I have seen or heard of around ten movies with this concept.  It sucks and let's just throw it out.

Okay, I am done with my rant.  The plot is absolutely ridiculous and makes zero sense.  Everyone seems to accept this.

I guess the acclaim comes from the special effects and the compelling relationship between Scotty (Stewart) and Madeleine (Novak).  But for me, this is just another one of those Hollywood movies where a man falls in love with a crazy woman just because she is pretty and really, no other explanation is giving.

This review is making it sound like I hated the movie.  I didn't; it was actually entertaining and exciting to the very end.  I suppose I just feel like Hitchcock underestimates his audience a bit in this movie and it pisses me off.  Still a good film, though.  That is how good Hitchcock movies are: he can screw up and still is able to make a masterpiece.

The famous zoom out then track in shot was invented for this film.

Panned by critics upon its initial release.

Hitchcock blamed Stewart for the failure of the film and never worked with him again.

HITCHCOCK RADAR: Carrying an instrument case around eleven minutes into the film.