The Defiant Ones
1958
Directed by Stanley Kramer 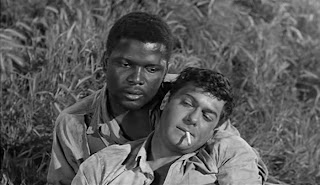 333!  That's one third of the way through people!  Well, almost.  Still exciting though!

This movie was pretty hard to find and the only way I was able to watch it was by, um, watching it online.  Let's move on; it is better for all of us if I don't include that many details.

In one of the most obvious symbols in the history of cinema, we have this obscure little film.  Tony Curtis and Sidney Poitier are chained together after escaping from a truck carrying convicts.  Of course, racial tensions are explored.

So, on the one hand, I like the premise, though it is a bit heavy handed in its message.  The idea of two people that don't get along forced to go on an adventure with each other, and then proceeding to gain a deeper understanding of each other isn't exactly a fresh concept, even in 1958.  Now, of course, that is pretty much the premise of every romantic comedy film.  Still, it is well done here and we get some great dialogue from the two actors.

Now I am going to drop a truth bomb here.  I have never been a big fan of Sidney Poitier.  I know some people think he is the greatest actor of all time but I have never been super impressed.  He's not terrible, just not fantastic.  I do like Tony Curtis, though.

I guess my final assessment is that it does make for an entertaining watch but its lack of subtlety is a major flaw.  I would like to at least be given a little bit of room for my interpretation but the overall message of this film is "racism is bad."  I am not saying that is not a good theme and it was particularly pertinent in the late 1950s.  For the modern viewer, however, you don't really get a lot out of it.

Elvis Presley originally wanted the leading role.  Thank god he was talked out of it.

Because the South was so segregated, there is absolutely no way that a black man and a white man would be chained together.  This glaring inaccuracy was the reason that Robert Mitchum turned down the main role.