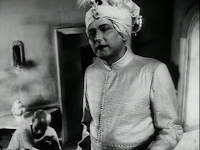 I was trolling YouTube awhile ago trying to find a good movie to watch and I came across this obscure film.  Now, though, I am well acquainted with Ray, having seen 2/3rds of Apu Trilogy.  After seeing what he is capable of, I would consider this the worst film of his I had seen.  That being said, it is still a beautiful picture.

Biswambhar Roy, a former lord who is on the verge of bankruptcy, decides to put on one last concert in order to show up his rich neighbor, Mahim Ganguly.  Ganguly is jealous of Roy's status while Roy is jealous of Ganguly's money.  A wicked dance off ensues, which, unfortunately, does not involve any street gangs.

But, like I said, this is a beautiful film. Ray seems to be in love with the Indian environment and it shows in all his films.  Additionally, there is a nice little message here about the danger of wanting what you can't have or living in the past.  Still, it drags and for that, it only gets three stars.

Panned by Indian critics but praised by European critics.
Posted by Amanda at 2:21 PM