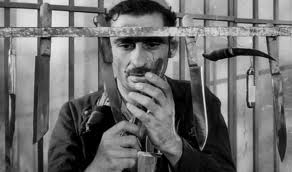 I was told quite awhile ago by a fellow 1001 movie blogger that this movie was nearly impossible to find.  However, I simply typed it into YouTube this morning and there it was, complete with English subtitles.  Videos are frequently taken down on YouTube because of copyright infringements so I don't know how long this will be up and I would recommend watching it as soon as possible if you are interested.  I guess I just got lucky!

Now, then, what the hell did I just watch?  This is the first Egyptian movie on the list (possibly the only one) and this was certainly not what I was expecting.

A lame young man becomes obsessed with an engaged woman.  He proposes to her, despite her engagement, and she says no.  He then goes absolutely insane and tries to kill her.  Ah, true love.

I am trying to digest this movie, but really I have never seen anything like it.  It reminded me of a Shakespearean tragedy where one character just goes crazy and starts killing everyone.  Although, at least in Shakespeare, we get some soliloquy that explains the character's actions.  Here, we just have a random guy who says he loves a girl for no apparent reason and then goes insane.  I guess my main problem is that there is not enough relevant dialogue so everyone's actions just seem completely out of the blue.

So yeah, it is kind of a crappy plot and I am pretty sure that the only reason this film is on the list is because it was the first Egyptian film to achieve any kind of international recognition.  What an odd and obscure movie.

I can't seem to find any trivia on this movie because of its obscurity.

Here's where I found it: