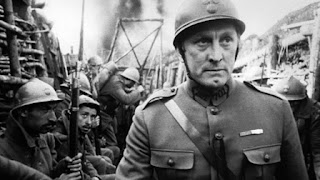 Here we go with the Stanley Kubrick movies, which we will not be done with until the late eighties.  Kubrick is sometimes extremely enjoyable and at other times, pretentious and boring. I definitely flip flop on my opinion for this man and hopefully, by the end of this journey, after seeing his movies in order, I will be able to form a more definite opinion.  For now, though, we just have Paths of Glory to deal with.

The last movie I watched was a sappy romance and now we have a war film.  Talk about movies that I just cannot get into.  Maybe next time there will be a sports biography!

I should really like this movie.  It certainly sounds interesting enough.  Kirk Douglas stars as Colonel Dax, who attempts to defend his men in court after they refuse to take part in a suicide attack.

Let's start with what I liked.  First of all, I am extremely sick of the "war is bad" theme.  Yes, we are all aware of that.  However, this film chooses to specifically attack military courts, which is a lot more compelling and thought provoking.  Also, props have to go to both the actors and the cinematographer.

Despite all of this, I still was bored.  I couldn't help it; I was just waiting for the film to end.  On paper, this film is fantastic.  I will probably try it again soon; maybe I just wasn't in the right mood.  So I would still recommend this movie, but it just isn't my cup of tea.

Banned in France and Switzerland.

Churchill claimed that this movie was quite accurate when it came to trench warfare and military courts.