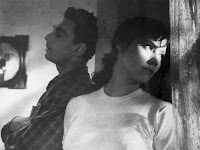 I cannot remember the last time there was a Russian film on the list.  When I was in my silent film phase, it seemed like every other movie was some Soviet propaganda film from Eisenstein.  The Book explains this by saying that in the last years of Stalinism, the studios shut down because of economic devastation.  Then, when Stalin died, productions started up again, although this time the films were, fortunately, less propagandistic.

This is a somewhat sappy love story.  Veronica and Boris are in love but Boris goes off to war anyway.  Veronica is sad and tries to move on but she can't seem to forget Boris.

I am not really one for the extremely sappy love story; for me something else has to be going on, like a ship hitting an iceberg or a snappy dance number.  This was just pure sappiness.  Granted, the cinematography is beautiful and the acting is fantastic.  It certainly is a good film, just not the type that I enjoy immensely.  Still recommended.

One of Martin Scorsese's favorite films.