Once Upon a Time in Hollywood
2019
Directed by Quentin Tarantino 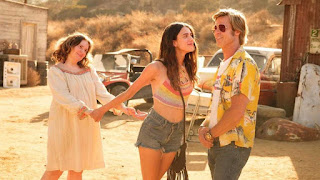 I am trying to distract myself from my Anxiety: Global Politics Edition, and what better way to do that than to discuss movies made by the man known for crafting excellent escapism films? While the execution isn't always there, his passion for movies is palpable in every scene he directs.

This time around, Tarantino tackles the Manson family murders. In addition to focusing on Sharon Tate's story, the film follows fading actor Rick Dalton and his stunt double, Cliff Booth, as they navigate the new age of Hollywood.

This is actually the last movie I saw in theaters in the before times, when you could go to theaters and then make your date uncomfortable with your rigid rules regarding proper snacks and arrival times.  So I have positive associations with this movie that undoubtedly affect my opinion on it.

Even so, the performances alone are enough to make the movie worth watching. Brad Pitt and Leonardo DiCaprio are really great actors, and I never get the sense that they are trying to overpower the movie with their performances. And Margot Robbie is predictably radiant as Tate.

I feel like most movie lovers will be delighted by all the nods and homages to cinema peppered throughout the story. And Tarantino fans will be thrilled by the gruesomeness of the ending. He's begun to parody himself in terms of violence, but at least he chooses a few satisfying victims.

An excellent, absorbing movie, which some of us dearly need right now as we wait...

Roman Polanski was not consulted about the movie.