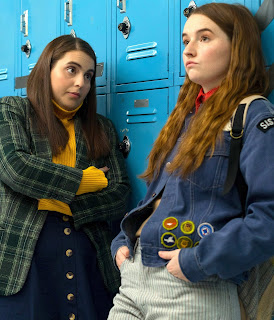 I was pretty delighted to see this included on the new edition of the List. I hadn't seen it before, but I knew it was a coming of age story about two dorky teenage girls. Now I'm a teen plus, but I can still relate.
Amy and Molly have been best friends since childhood. Amy plans to spend the summer after graduation in Botswana helping women make tampons, while Molly is on the fast track to becoming the youngest supreme court justice of all time. The night before they graduate, they realize that they might have missed out on some essential high school experiences by working so hard. They plan to cram all their fun into one night.
There is a pretty standard blueprint for these stories, and they almost always revolve around the Big Party. Booksmart is pretty formulaic in that regard, and even includes the gross out humor seemingly required in all teen comedies.
But it's different in who is telling the story. There's a distinctly female slant here that I really enjoyed. It's probably one of the few movies I've watched lately that passes the Bechdel test. This is Olivia Wilde's directorial debut so she probably hasn't quite found her voice yet, but this was a promising beginning. At any rate, we didn't have to suffer through the typical male perception of what teenage girls are thinking.
It's not the funniest comedy I've seen, but it is still entertaining and worthy of a watch.
RATING: ****-
Interesting Facts:

Kaitlyn Dever and Beanie Feldstein lived together for ten weeks to build a believable rapport with each other.
The cast were encouraged to rewrite their dialogue if it didn't feel genuine.
Posted by Amanda at 5:39 AM