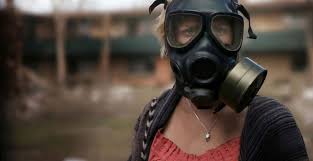 With this entry, I reach another milestone that was snatched away from me a few weeks ago when they updated the List. Since there is now a grand total of 1235 movies on this List, we are, once again, 100 movies away from finishing! Having just completed my album blog, I will now have more time to devote to wrapping this thing up.
A NASA space probe crash lands in Mexico, and infects the world with giant tentacled monsters. Andrew Kaulder, an American photojournalist, is tasked with escorting his employer's daughter, Samantha, from Mexico back to the United States.
I am not sure Monsters contributes anything new to the monster/alien invasion genre. But I still appreciate how economical it is, even if you have to put up with characters behaving stupidly. I actually saw this in a film class in college, and I am still not convinced it is essential viewing. But that guy also made us watch Last House on the Left, so fuck him.
Also, this would have been a better October watch, but I didn't realize it was on the List until it was too late. Please forgive the disrespect to last month's theme.
RATING: ***--
Interesting Facts:
All of the film's extras were just people who happened to be there during filming.

The two main actors are married and have children in real life.