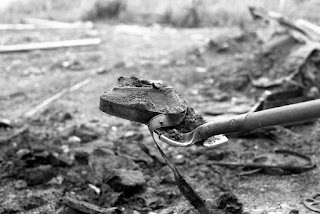 If you love learning about the history of film, you will really enjoy this documentary. If you're a normie, you will be fairly bored by the two hour examination of silent movies from the early 1900s. I fall somewhere in the middle. I love movies as much as the next person who's written 1136 posts about them, but my love for cinema isn't really rooted in its technical history.
The film focuses on the history of the town of Dawson City. In 1978, 533 reels of silent-era nitrate films were discovered under an abandoned hockey rink. The film features some of this footage, along with some supplemental material for context. The documentary adopts silent film practices to tell the story, such as using intertitles in lieu of voiceovers.
So parts of this documentary were very interesting to me, like when they covered historical events, such as the murder of William Desmond Taylor and the Black Sox controversy. Other stretches were not so intriguing, and I found myself watching the clock quite a bit.
Worth watching if you are fascinated by film, but don't expect to be on the edge of your seat.
RATING: ****-
Interesting Facts:
Contains footage of the 1919 World Series, which is known for the Black Sox betting scandal.
Posted by Amanda at 4:49 AM