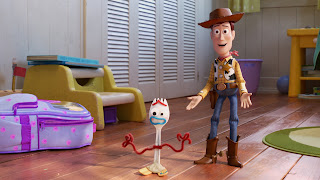 Boy, the List sure is getting cute, counting all four Toy Story movies as one entry. Yes, there is a shortage of animated movies on the List, but Pixar has plenty of other tasty offerings.
Woody and company are adjusting to life their lives' as Bonnie's toys, while Bonnie adjusts to starting kindergarten. She makes a toy out of a plastic spork. I guess that means every man, woman, and child in this universe is capable of giving sentience to inanimate objects. Which is actually pretty terrifying, but they refrain from going too dark with it (this time). Bonnie's family goes on a road trip, the toys get separated, and they must reunite before Bonnie's family leaves forever.
Like most Pixar movies, this one leaves you feeling a little heavier after watching it.  The underlining themes of loss of innocence make it emotional to watch. That being said, I was never that invested in these characters, no matter how often they repeat their catchphrases. There are plenty of references here for Pixar fans to enjoy and of course, Disney will squeeze every penny they can out of your nostalgia.
I was concerned Toy Story was on what I refer to as "the Die Hard series trajectory". Meaning the first one was excellent, the second was expendable, the third was really good again, and the fourth has Justin Long. Luckily, as a fourth installment this wasn't so bad. Just not very memorable.
RATING: ***--
Interesting Facts:
Had the longest production cycle out of every Toy Story movie so far.
Forky was originally called "Fork Face" but that was deemed too obscene for children. I think the Listmakers are a bunch of fork faces for not including Inside Out or Coco.
Posted by Amanda at 5:19 PM