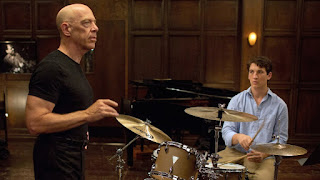 I love JK Simmons, he pops up in some of my favorite movies and television shows. It's nice to see his talent recognized with a larger role. I can even forgive him for his involvement in Veronica Mars, Season 4, which is no small thing.
Andrew Neiman is an ambitious jazz drummer and a first year student at the prestigious Shaffer Conservatory in New York. Terence Fletcher, a conductor and bandleader, invites him to be alternate in his elite Studio Band. Fletcher models his teaching style after the drill instructor in Full Metal Jacket. Andrew is desperate to win his approval, and become the next Charlie Parker (because that's a good thing?).
It's interesting watching this right after Wall Street, which also followed the dubious mentor and eager-to-please student dynamic. This is definitely the superior movie. Miles Teller is a much better actor than Charlie Sheen. I feel Andrew and Terence's passion more, and the plot is more compelling because of that.
I won't spoil the ending, but I was impressed by how far they went with it. Highly recommended.
RATING: ****-
Interesting Facts:

Shot in 19 days.
Andrew appears in every scene of the movie.
One of the lowest grossing movies to be nominated for Best Picture.
Posted by Amanda at 3:30 PM