Under the Skin
2013
Directed by Jonathan Glazer 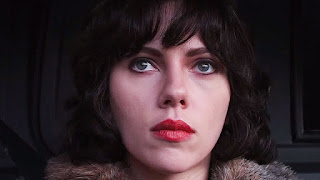 I was pleased to find this delightfully strange novel had a film adaptation. It would be really hard to do a faithful adaptation, so this movie tried to go another route by out-weirding its source material.

In the book, the main character is a very ugly woman with big boobs. So naturally, they cast Scarlett Johansson for the role. I am not really sure how to describe the plot. Basically, a woman lures hitchhikers into her car in Scotland, and ScarJo attempts a Scottish accent with little success. At least her character is supposed to be otherworldly so it doesn't matter so much. Anyway, what she does with her victims once she's trapped them is much more interesting in the book.

I feel like this movie lacked the chutzpah to adapt the story entirely, so settled for something guaranteed to be pleasing (ScarJo naked). I thought it was pretty dull, but it was trying its hardest to be artsy and provocative.

A skippable movie, but an excellent novel.

The men ScarJo picked up were not actors. Jonathan Glazer had hidden cameras installed in the cars and only told the men afterward that they were in the movie.