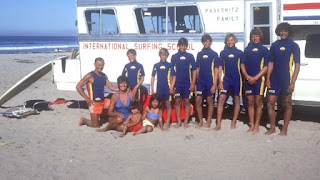 My family has never been a camping family. I can only imagine how we would have fared in these conditions. Personally, I would have rolled out of the moving car, since I can't read in a vehicle without motion sickness.
Surfwise focuses on the Paskowitz family, which consists of Dorian, his wife, and their nine children (eight boys and one girl). Dorian believes in not educating his children, not providing them a permanent home, and having sex with their mother in front of them on the reg. Oh yeah, and also surfing.
It was interesting how the documentary slowly shifts from glorifying Doc's holistic way of living to showcasing the damage he did to his family. Then the film takes one final turn, but it maintains its respect for its subjects throughout the entire run time.
Maybe it didn't rock my world, but the central themes were timeless and handled with grace.
RATING: ****-
Interesting Facts:
Shot over the course of five weeks.
Doug Pray found Dorian Paskowitz to be incredibly difficult to interview.

David Paskowitz was the first person interviewed for the film.
Posted by Amanda at 2:32 PM