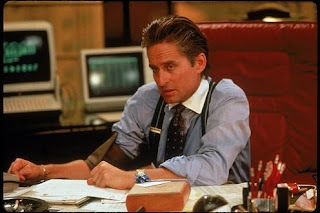 I am very excited about the results of the election, even if it's nerve-wracking to imagine what's to come. Democracy only works if a loser accepts a result, and we have the biggest loser in US history on our hands. I guess we just have to wait and see what happens. Charlie Sheen's presence in this movie and reputation as another narcissistic maniac makes it easy to segue into talking about Wall Street.
Bud Fox is a young stockbroker who gets involved with Gordon Gekko, a greedy corporate raider. He begins to enjoy the lifestyle that Gekko offers, and the many perks that come with it, which include sex with Daryl Hannah and a penthouse on the Upper East Side. First comes the rise, then comes the fall.
I had actually never seen this before, but I was still familiar with the famous "Greed is good" speech. That was a damn good speech. The trouble was, the rest of the movie is pretty terrible. Apparently, Oliver Stone thought Charlie Sheen's stiff delivery lended his character a believable, naive quality. Um, okay. I guess Daryl Hannah overheard that praise, with dire consequences.
The movie was still fun in parts, because of Michael Douglas and its intense 80s factor. But the performances really drag it down.
RATING: **---