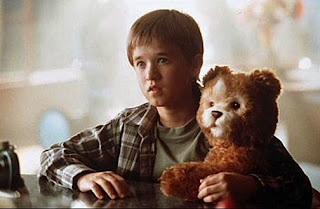 We now have a new contestant for Most Annoying Movie Child. I thought the kid from Terminator 2 would manage to hold onto that title forever, but I guess he was dethroned all the way back in 2001 and I didn't notice. That's not to say Haley Joel Osmont isn't a great actor, but I personally would not have struggled with the decision to send David to the junkyard.
A childlike android is programmed with the ability to love, and I guess an Oedipus complex isn't an optional feature. The android, David, is adopted by Monica and Henry. Their real son is in suspended in animation after contracting a rare disease and David fills what turns out to be a temporary void. Once Monica and Henry's son recovers, David finds himself on the outs with the family. Oh yes, and Jude Law plays a sex robot, in his most convincing role yet.
Spielberg's cloying sentimentalism gets on my nerves, but I read the sappier aspects were actually part of Kubrick's original vision for the project. Oh, Kubrick, you old softie. Either way, I felt this movie tried to tug on our heartstrings a little too much.
Also, it was way too long, and I feel Kubrick should take the blame for that as well.
RATING: **---
Interesting Facts:

Spielberg passed on Harry Potter and the Sorcerer's Stone to direct this movie.
It was Haley Joel Osmont's idea not to blink for the entire movie.
Posted by Amanda at 3:10 PM