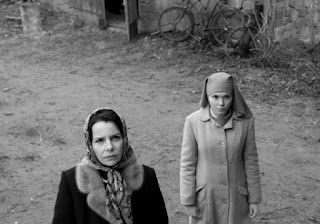 I needed a fun movie to come along and get rid of my pandemic ennui. And what's more fun than a black and white movie about a Polish nun? Besides literally everything ever?
In the 1960s, Ida is a young Polish nun about to take her vows. Before doing so, she visits her only surviving relative, her Aunt Wanda. Aunt Wanda is a cool aunt, or at least, cooler than Ida. Ida learns some shocking news about her family history, which forces her to question her intended path.
I thought Ida was one of the least compelling protagonists I have ever seen. It makes sense for her character that she was so subdued, but that didn't make it easy to watch. I felt like the character was numb to everything, so watching her make discoveries wasn't the most thrilling experience.
Just a drab movie, even if the story is somewhat interesting.
RATING: ***--
Interesting Facts:
Agata Trzebuchowska's film debut.
Trzebuchowska is an atheist.
Posted by Amanda at 7:54 AM