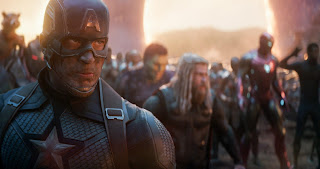 I suppose it makes sense that this was included, as it's currently the highest grossing movie of all time. But sitting through three hours of this was a chore, no matter how many perfect human specimens appear in spandex.
I guess it's difficult to give a plot synopsis here without giving away spoilers. Does anybody even care about spoilers when the events have no permanence? Oh well, here we go. The action figures (I won't even call them characters) attempt to recover from whatever happened in the previous 166 movies. Time travel is involved, which leads to brilliant dialogue such as "They’re not trying to stop something I’m going to do in our time. They’re trying to undo something I’ve already done in theirs." Huh?
I just found this to be really boring. It's tedious following the ridiculous plot, and it doesn't get charming no matter how often the actors wink and nudge at the audience, seeking to ensure us they're in on the joke.
I have probably missed about fifty Marvel movies that are connected to this one, which might explain why I have no attachment to any of the characters. I don't think the Russo Brothers are really the best at capturing real human moments. But I think those moments are essential to make a good superhero movie, otherwise it's just a sequence of loosely connected action scenes.
But I suppose Marvel and comic book fans will have fun spotting all their favorite hotties and revisiting many familiar moments from the franchise.
RATING: **---

Brie Larson filmed her scenes in this movie before shooting Captain Marvel.
Longest Marvel movie of all time. You don't say!
Chadwick Boseman's last appearance as the Black Panther.
Posted by Amanda at 8:01 PM