The Farewell
2019
Directed by Lulu Wang 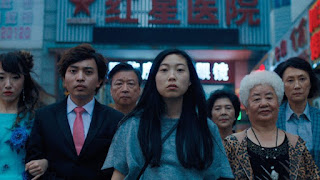 I had seen a trailer for The Farewell in theaters in the before times, and was eager to see it. Well, I finally got around to it, sans the delicious popcorn and interaction with other human beings. I like to think of this as Awkwafina's apology letter for Crazy Rich Asians.

Billi has maintained a close relationship with her grandmother Nai Nai, despite living in New York while her grandmother is back in China. Billi discovers from her parents that her grandmother has been diagnosed with terminal cancer. Her family decides to keep it a secret from Nai Nai, and use a cousin's wedding as an excuse to give everybody a chance to see Nai Nai one last time.

I loved the performances in this movie. Right off the bat, we have a very believable family unit. It was interesting to consider the morality of their decision, and how Eastern and Western audiences may view the ethics of their behavior differently.

So a really interesting film that was everything Crazy Rich Asians wasn't.

The film was inspired by Lulu Wang's family not telling her grandmother about a terminal cancer diagnosis.

In addition to directing and writing the movie, Lulu Wang played the piano on the film's soundtrack.