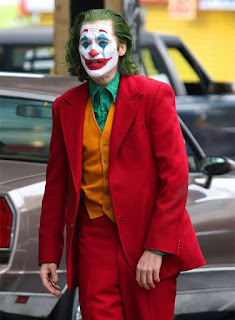 Our final Halloween movie is one that I knew I was doomed to watch, because the List never misses the opportunity to showcase a white man performing his little heart out. So this was about as inevitable an entry as My Left Foot. I had the preconceived notion that I was about to watch Incel: The Movie and I wasn't that far off.

Arthur Fleck is a failed clown and comedian, who lives with his ailing mother in Gotham City. His mental deterioration is charted throughout the movie and inspires other unhappy citizens to rise up.

Much like Martin Scorsese, I don't like superhero movies (I am sure Mr. Scorsese would appreciate it if the comparison ended there). Of course, this is barely a superhero movie, but certain tropes crop up anyway. Among those tropes is the lack of moral ambiguity. I know some will argue that the movie is all about moral ambiguity. But I think they simply flipped the script. They made the Joker into the hero and the whole of society the enemy, without picking up any subtleties along the way.

To me, considering the perspective of the disenfranchised white man doesn't feel all that revolutionary. Authors like Chuck Palahniuk explore this theme often, and even movies like Taxi Driver or King of New York do a better job tackling it. I don't think there is a shortage of artistic works that take on this type of character.

I keep arguing with my male friends about this movie and honestly, I don't even know what the argument is. I didn't enjoy it, but I don't think I was supposed to enjoy it. I think it wanted me to feel unsettled and complicit in all of Arthur's humiliations. So in that way, it was very effective, and I think I had the desired response.

I guess a mention should be made of the performance. Actors have decided they have to lose their mind and critical body mass to play this role. Joaquin Phoenix does fine here, and laughs, dances, and runs like a psycho.

So in the end, a dark superhero movie. What a fresh take!