Into the Wild
2007
Directed by Sean Penn 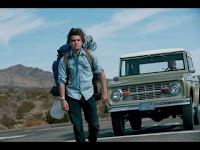 I didn't expect to enjoy this one.  Christopher McCandless, in my opinion, doesn't deserve his nearly mythical status.  I think his actions were fairly selfish, arrogant, and possibly suicidal.  I can't even imagine putting my family through the ordeal that he forced on them.  I also have never really romanticized the beatnik lifestyle, having found On The Road to be self indulgent.  Fortunately, this was more entertaining than I expected.

In 1990, McCandless graduated college with high honors.  He decides to abandon his family, destroy all of his credit cards and identification documents, and donate all his savings to Oxfam.  He hits the road, meeting many memorable characters along the way.  He finally ends up in the Alaskan wilderness and um...well, you know the rest.

It's the supporting characters that really make this film memorable, as I couldn't stand McCandless himself.  I also wasn't a huge fan of Penn's direction, which was wonky at best.  Still, there is no denying that this film looked beautiful.  Most importantly, 999!!!!

No stunt doubles were used for Emile Hirsch.
Posted by Amanda at 2:51 PM