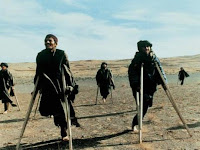 Well, as you can probably tell from the above photo, this film isn't exactly a bucket of laughs.  Between this and Moulin Rouge I might have to start inserting pictures of puppies to cheer things up around here.

Nafas is a successful reporter who was born in Afghanistan but fled to Canada when she was young.  Her sister, who still lives in Afghanistan, writes her a letter that says she plans to kill herself during the next eclipse.  Nafas tries to get to Kandahar before that happens, but um...Afghanistan isn't exactly a dream location for a female driven road movie.

So this movie is basically a simulation of my worst nightmare.  Sister in peril, oppressive regime, people fighting over artificial limbs...The way women are treated in this film is absolutely horrifying.  Although perhaps the most horrifying thing was that the behavior didn't shock me in the slightest.

The people that need to see a film like this probably never will, so it is up to us poor list schmucks to watch women be terrorized and oppressed.  Almost at the finish line...

Hassan Tantai played the role of Tabib Sahid.  Tantai killed an Iranian diplomat in 1980 and it is still wanted in the United States.
Posted by Amanda at 11:26 AM