991. Borat: The Cultural Learnings of America for Make Benefit Glorious Nation of Kazakhstan 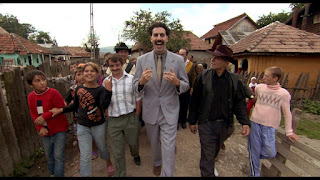 It's my own fault for getting cocky.  I was starting to think it was going to be hard to pick a Worst Picture for the 00s set.  Well, this just made things a little simpler.

Kazakh reporter Borat is sent to the USA to report on "the greatest country in the world."  When he arrives in New York, Borat sees an episode of Baywatch and desires to make Pamela Anderson his wife.  Hijinks ensue for eighty four insufferable minutes.

Look, I get the concept.  Sacha Baron Cohen acts like a racist, anti semitic, sexist asshole which encourages the real people he interviews to reveal their own prejudices.  Of course, I am sure that the majority of high school aged males aren't laughing at the exposed hypocrisy and ignorance.  Maybe for my own peace of mind I will pretend that everyone understands this is a satire.

No one is safe from Cohen's insults and disgusting jokes, so in the end it is only offensive to people with good taste.  Still, I found this to be incredibly dull and painful to sit through.

The police were called on Sacha Baron Cohen 92 times during filming.