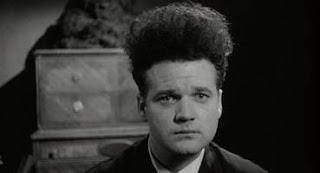 Oh man.  David Lynch's reign of terror has begun.  At least I am delivering one horror film for Halloween.  My sister and I are attending an all night horror movie marathon tonight!  It should be truly awful, as I think at least one Halloween sequel is on the menu.  Fun, fun, fun!

Ugh.  Let's get this out of the way.  Frequent readers of mine could probably predict I would hate this.  Henry Spencer has a baby with his girlfriend, but there is something wrong with the child (think Voldemort in The Goblet of Fire).  I read that David Lynch's daughter has clubfoot, so she believes that the inspiration behind the mutated baby was Lynch's regret about having her.  If that's true...well, I can't even think about that.

So I guess the filmmakers wanted us to feel disturbed and make us wish we hadn't seen some of the images?  Good job, I suppose?

Stanley Kubrick made the cast of The Shining watch this movie to get the feel of the horror genre.  You hear a lot of stories about how Kubrick is abusive but that has got to the worst.