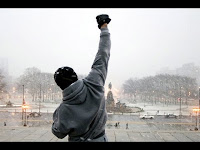 There have been so many iconic movies lately to review!  Mostly, I have given them the praise that everyone else but I am not going to be able to get behind this movie.  Although I do have to admit, when I visited Philadelphia, I did the pose on top of the steps.  There, got that off my chest.

Rocky Balboa is an enforcer for a loan shark by day and a prize fighter by night.  The World Heavyweight Champion, Apollo Creed, selects Rocky as his opponent when his original challenger backs up.  I know from experience that it is always great being a second choice.

I don't like sports movies and wasn't particularly impressed by any of the actors here.  Still, watching this film wasn't the worst experience.  The training scenes fill me with a kind of film related nostalgia that made seeing this movie semi worth it.

Even so, the fact that this movie won Best Picture over All The President's Men makes me twitch a bit.

Sylvester Stallone had only $106 in the bank when his screenplay was sold.

Stallone flattened his knuckles by hitting the meat so hard for so long.
Posted by Amanda at 12:09 PM