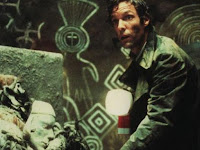 I managed to squeeze another movie in today.  My sister was watching a film for this List, as she has also undertaken this journey, and I got intimidated!  I ended up being slightly resentful that she got to watch The Incredible Shrinking Man and I was stuck with this.

I found this film to be somewhat confusing and once again, we don't get any satisfying explanation about what the hell is happening.  It's quite an annoying trend.  Basically, four Aborigines are accused of murder.  David Burton is procured for their defense and I guess the men's tribal ways break his brain.

So I like I said, this was a bit of a chore to sit through.  I have been very disappointed in the Australian films on the List.  They have all been rather dull and they always seem to end in a really confusing way.  I suppose it was interesting seeing Aboriginal culture, but I am not sure how accurate or flattering their portrayal in this film was.

Are we done with Peter Weir yet?

The city of Adelaide was used instead of Sydney for the majority of the scenes.